Have you ever tried making maple syrup from the maple trees in your front yard?
I’d like to share how our family started this inexpensive hobby a few years ago.

Our family set out on this adventure, thanks to some of my husband’s buddies. One of them cruises timber for a living and brought up the idea. Since we live on a farm with lots of trees, we thought we’d try it out. If you’ve ever read Laura Ingalls Wilder’s book, [amazon_textlink asin=’0060581808′ text=’Little House in the Big Woods,’ template=’ProductLink’ store=’besidethecreek-20′ marketplace=’US’ link_id=’b8b60de7-fdb7-11e6-8b5c-573f89773bbf’] you know where this is going. It has turned into a favorite winter past time, and ohhhh so yummy!

To give you an idea as to why real maple syrup is so expensive in the stores, let me share some numbers with you. For Red Maple trees(which we use) it takes 50 gallons of sap(water) to cook down to 1 gallon of gooey syrup. For Sugar Maples it takes 40 gallons to produce 1 gallon of the tasty treat. The sugar content is higher in the Sugar maples, hence the difference.

Our total expenses for this hobby have totaled about $125. Compare that to the average price for store bought maple syrup, which can be anywhere from $37-$75 for just one-half gallon, and you’ve got quite the savings. Plus, our expenses are one-time purchases because they can be used year after year.
Included in those expenses were 5/16 inch taps, the tubing, and 5 steaming pans. The taps and tubing can be purchased very cheaply at www.mapleguys.com
We use the simple black elbow style tap, but there are other styles as well. The tubing comes in a roll of 500 feet, so that’s enough to share or have about 166 taps… 🙂
The steam pans were the most expensive, at about $15 a piece. But, if you know folks in the catering business, they might be able to get them for you cheaper.

So, before you jump right in and start your own syrup making, read about some of the “tricks” we’ve learned over the past few years.  In addition to the taps, tubing, and steam pans, you will need the following:

*4 or 5 gallon buckets with lids (these we got for free from a local restaurant. Whipped margarine or sometimes hard boiled eggs come in these.  The manager was very happy to get rid of them, along with their tight lids.)
*drill with 5/16 drill bit
*a cooker (more on that)
*holding tank (aka big black trash can)
*cheese cloth for straining

Part of Livin’ with what’s given is the fact you use what you’ve got! In our case, we started out using a 2-burner propane camp stove. After the first year, we quickly realized that using the propane was NOT cost effective. So, my handy husband converted an old oil tank into a “cooker”. He did some cutting and welding, added some vent holes, and a place for the stove pipe. Viola! The Syrup Cooker.

We use scrap pieces of wood from around the farm as fuel. Now, if you’re able to purchase a “real” cooker, go for it! They are out there. The Maple Guys sell those too.

We have the cooker under a 2-sided shed so we can make syrup even in the rain. Once the sap season is over, we take it out and use the shed for the grill, bikes, etc…

The best time for the sap to run is when it freezes at night, then warms up to about 40 or 50 degrees during the day. For Southwest Virginia, the season lasts from about late January to mid-March. The further north you go, the later your season.

Once you’ve cut your tubing (about 2-3 foot sections) and have attached the taps to one end, you’re ready to drill. First, drill a hole in the lid of your bucket to insert the tube in. Next, you want to drill a hole in the tree at a slight upward angle and only drill in about an inch or so.  If it’s warm when you make the hole, you might be surprised to find water starts to drip out immediately. That’s the sap! Make sure you have your buckets in place and your taps and tubing ready to insert because you don’t want to waste any of that sugary goodness.

When deciding where to drill your holes, go about 2.5 feet off the ground. Look for a spot that gets direct sunshine, and is under a thick branch.

The weather plays a factor into how long it takes to gather enough sap to boil into syrup.
For example, after 5 days of gathering, we ended up with about 25 gallons of sap so we started cooking. We use a 32-gallon trash can

as a holding tank. As the sap heats up, it steams. As it cooks down, we add more to the steam pans.

After 2 days of solid cooking (a little less at night), here’s what the sap looks like. You can see the rich brown color starting to form.  We strain the sap through cheese cloth at 2 different points in the process. First when we pour into the final pan, and again when it gets to the point where it has to come inside to the kitchen stove.

Once it gets to a darker color and noticeably thicker, we begin cooking it indoors on med-high heat. Now is the time that you really have to watch it!! No multi-tasking either. If you don’t, you will end up with a mess and some burnt syrup…

As it boils, you will notice a change in the bubbles. In about 15 minutes, we went from the previous picture to this one

Turn the heat down a bit so it doesn’t boil over, but keep it high enough that it still is a rolling boil. (A boil that doesn’t stop when you stir it). You are aiming for a temperature of 200* with a candy thermometer. Once your bubbles are tinier, look out! You’re almost there!

Besides using the thermometer, you can do the metal spoon test: if it coats the spoon nice and thick, it’s done.  Once indoors, this part takes about 1 hour.

Very important** Make sure your glass jars are hot before you pour the gooey syrup into them. You can warm them in the oven on the lowest setting or microwave them for a few minutes. If you don’t do this, you will break your jars and lose some of your hard work.

Here’s what we ended up with from around 25 gallons of sap. About 1.5 quarts.  From here we pour it into various sized glass bottles and mason jars. Some we use as gifts, but we also make sure to keep some on the shelf for family waffle nights 🙂

Some folks prefer a strong maple flavor over a light one,  so I’ve included a chart to help know the different grades that are out there. Ours has never been “officially” graded, but I believe ours is a Grade A Amber. It’s full of delicious flavor and definitely all natural!  Plus it’s a great family past time.

So next time there’s a cold spell, make some pancakes or waffles, and sit down with the family and read Little House in the Big Woods.  Maybe you too will be inspired to experiment with Front Yard Maple Syrup!

Here is a chart showing how maple syrup is graded: 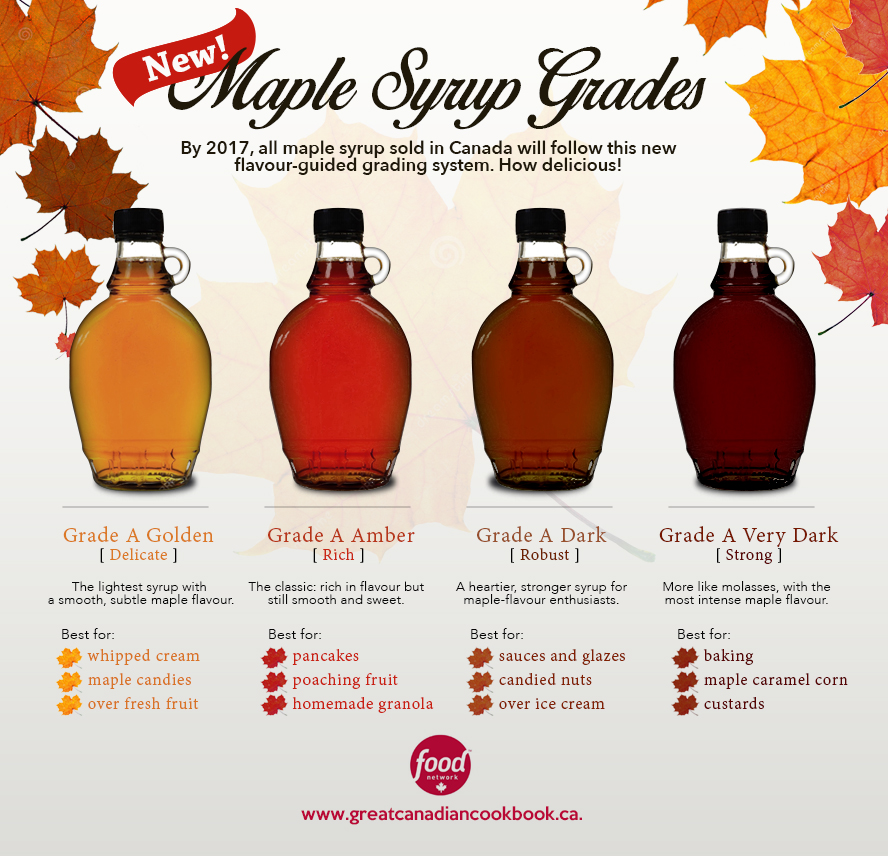